To speak of Albert Monteys (1971) is to speak of a painter of many brushes. Some of us know him for being the director of the famous magazine “El Jueves” between 2006 and 2011, a satirical magazine with political and current affairs. But his relationship with comics started before that.

Albert Monteys has been a comics fan since he was a child, and he has always declared himself an unconditional fan of Asterix, an iconic comic from the Franco-Belgian school, although his style is built on the foundations of Spanish comics and the Catalan school that have influenced him so much. Monteys was educated at the Escola Joso and in 1990 his first comic strip appeared in Líder magazine, from the now-defunct Joc Internacional publishing house that brought so many role-playing games to the Spanish market. With his bimonthly strip called Tío Trasgo he earned a position as a regular contributor, and even began to illustrate some supplements for role-playing games, until he became the publisher’s production manager.

It is in those years where he formed the La Penya Productions Collective, where he created the Mondo Lirondo comic series. In the 90s he entered El Jueves magazine, where he directed such memorable stories as Puta Mili or Penthouse Comix, until in 2006 he was appointed director. In 2011 he left the direction to focus solely on drawing, and in 2014, together with other cartoonists from El Jueves, left the magazine and created Orgullo y Satisfacción, a digital comic that would be alive until 2017. 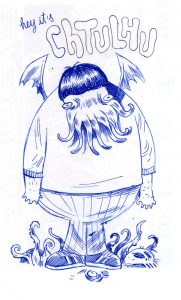 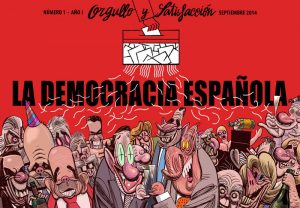 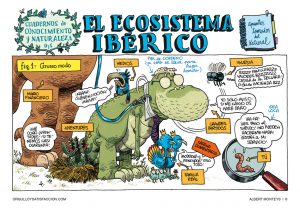 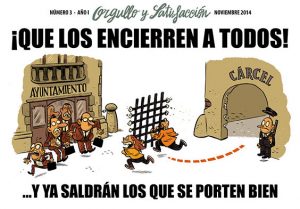 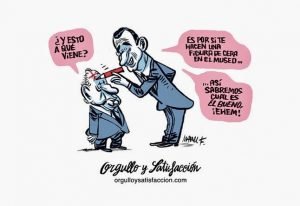 Monteys’ mischievous, hooligan style fits like a glove into board game illustrations, and this is where he begins his relationship with Devir. Albert Monteys declares himself a lifelong gamer, so putting the brushes to his first board game was a dream come true. Castellers! was published in 2017, a very fun family game designed by Josep María Allué and Dani Gómez and published by Devir. Josep María knew about Monteys’ work in the world of comics and was aware that his illustrations would bring an incredible facet to the game. This first collaboration marks the beginning of a fruitful relationship between the cartoonist and the publishing house Devir, which is experiencing its most successful moments so far.

In 2018 Monteys was in charge of drawing the new edition of Dungeon Raiders, which deals with the fantasy genre about which he is very passionate. The illustrations of heroes and monsters with that hooligan touch of the game gave the author the opportunity to refresh and modernize this dungeon classic. With an iconic cover, the result was astonishing. Monteys was able to bring narrative to the game so that the characters came to life thanks to his experience in the world of comics. The result is obvious to the eye. 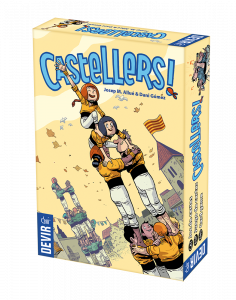 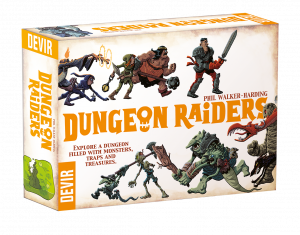 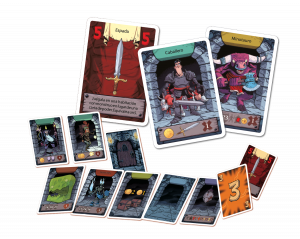 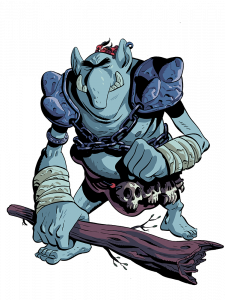 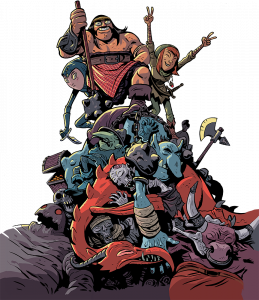 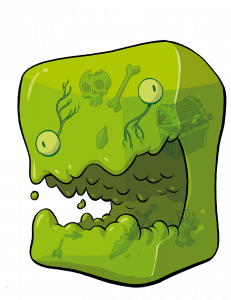 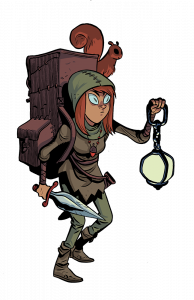 It was also in 2018 that Monteys illustrated Gretchinz!, an international success in which the author portrays the characters directly from the Games Workshop Warhammer 40000 universe. In this crazy car racing game with bombs, traps and a thousand other pranks, Monteys’ style shines alongside the crazy brains of the game designers. It was a bullseye hit that translated into commercial success.

We have to go back a moment to emphasize that, from 2014 to the present, Monteys publishes ¡Universo! through Panel Syndicate in digital format and with Atisberri Ediciones on paper. It is a series of retro-futuristic comics in which the author explores science fiction in its many forms. This work won the award for Best Webcomic at the Carlos Giménez awards by Héroes Comic Con in Madrid in 2017, and in 2018 he won in the same contest as a cartoonist and for a national standout. ¡Universo! has not stopped receiving awards throughout the years: Winner of the Dolmen Critics Awards in 2018, Winner of Best National Science Fiction Comic at the Lorna Awards of 2019, Best Digital Comic at the II José Sanchis Grau Awards (2019 ) and Best work by a Spanish author published in Spain (37 Barcelona Comic). 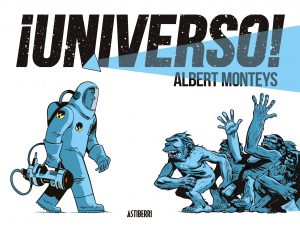 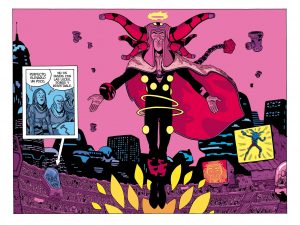 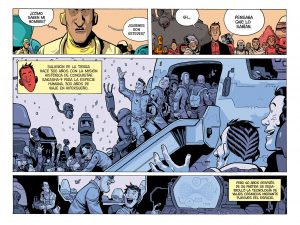 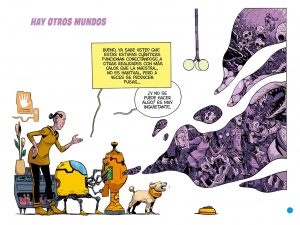 Thanks to this work, Devir knew that Monteys was the best option to bring LUNA Capital to life, as a publisher’s new commitment to a game of its own production and by a Spanish author. Monteys’ science fiction illustrations and that very personal touch of his put the finishing touch to José Ramón Palacios’ game, in which up to four players compete to create the best lunar settlement and thus become the capital of the Moon. From an intergalactic hamburger company to the luxury space cruise company, to a real estate company that wants to fill the satellite with apartments or a taxi company that knows that traveling by lunar rover is going to become good business, Monteys’ brushes bring to life this futuristic universe that turns out so resonant, and that is full of humor on all four sides.

Monteys is an extraordinary cartoon artist, and not only do we say it, everyone says it! In 1997 he won the award for Spanish revelation author at the Barcelona International Comic Fair, and in 2006, at the same site, he won the award for best national screenwriter for Carlitos Fax. Before, in 2001, he had already been nominated as a scriptwriter for Para ti qué eres joven, a classic from El Jueves. 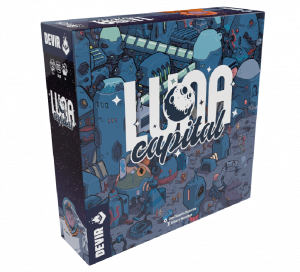 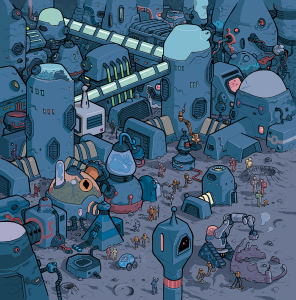 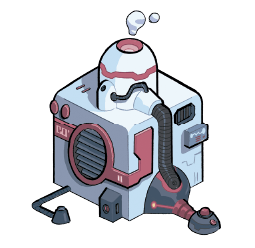 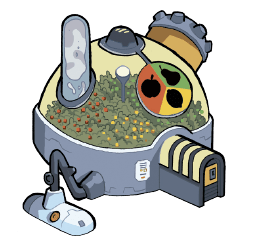 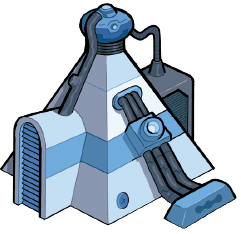 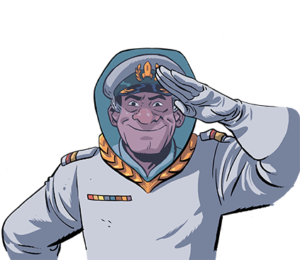 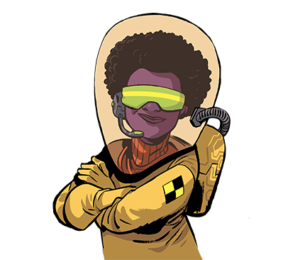 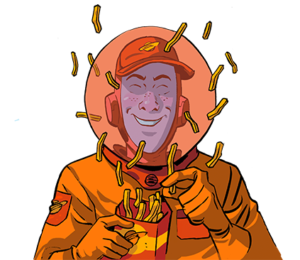 In addition to all the awards that ¡Universo! has garnered, we have to highlight Matadero Cinco (Slaughterhouse Five), a spectacular comic by Monteys and Ryan North, which adapts Kurt Vonnegut’s anti-war novel. Matadero Cinco has been an international success: it won the Lorna Award in 2021, and was nominated for Best Comic at the Ignotus Awards (2021), and the Eisner Awards (2021). This work has also received the award for Best International Work and Monteys won the award for Best National Cartoonist at the XXI Edition of the Dolmen Editorial Critics Awards (2021) … And the successes keep coming!

Long live Albert Monteys, and may his relationship with Devir continue to fill our shelves and tables with new universes to play and explore!